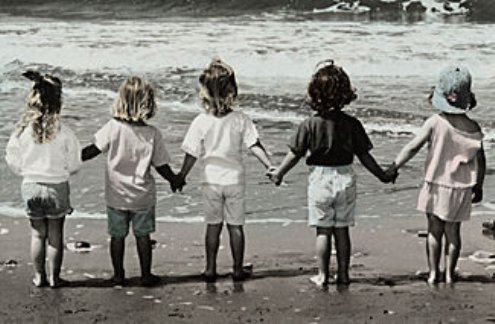 Lately the cancer world has me pondering the importance of friendships. What would we do without friends? Women, especially, needs their gal pals. In fact, recently on facebook a post went around about a study that was done that determined the best thing a man can do for his health is to marry a woman, whereas the best thing a woman can for her health is to nurture her friendships with other women.

A friend can be there to support me through the difficult moments of Elliot’s diagnosis and treatment, even if her children have never had cancer. She “gets it”. It doesn’t matter that it’s not her child, she actually feels the fear and anxiety I feel. How do women do it? We take on all the pain and suffering of those around us. When someone we care about hurts, we hurt too. Men are better at compartmentalizing their lives, at separating their emotions from their actions.

I was chatting recently with a mom, whose son had cancer years ago and is now considered “cured” (apparently you can only say “cured” with quotation marks, because there is never a real guarantee. Darn it, and here I was hoping for some kind of official He Is Cured document from the hospital at some point!) She mentioned that someone had recently told her that she should now “shut the door” on cancer, that it’s part of the past and it’s time to move on to thinking about new things.

We stared at each other a bit after she said that. Then she said it would be pretty hard to do as she had just signed up for a two-year term working with a children’s cancer group.

The thing is, there’s no door to shut.

Being a cancer mom isn’t a choice, and it’s (unfortunately) not a temporary role. Nobody enters the cancer wold willingly, but once you’re there, you don’t have much of a choice. You adapt. Even my friends whose kids don’t have cancer have been dragged into this world with me, sure, not as intensely as I have, but whether they like it or not, they can now chat easily about blood cell levels and remission and chemotherapy side effects and vomit stain removal and needles and port-a-caths. And they can laugh at it all, and cry at it all, and while they laugh and cry they can also make supper and do two loads of laundry and find the missing lego piece and clean the living room and feed the cat and stop one child from hitting the other and text a friend and polish their toe nails. While they are doing all this the husband usually only has time to walk into the kitchen open a cupboard, stare into it’s depths for several minutes, then ask, “Where do we keep the salt?”.

Ok I don’t mean to insult the male population there, and I may be slightly exaggerating (my husband actually knows where the salt is!). But seriously folks, let’s take a few seconds here to applaud all the women out there, cancermoms and cancerfriends, who are going through this journey or have gone through it already.

I live in an all-male household. This has some advantages. I told Jesse the other day to take out the garbage, and he replied with some kind of grumble that sounded like “ok”. A friend of mine (male) with a teenage daughter recently told me he had asked his daughter to take out the garbage and the girl broke down crying, accused her dad of trying to ruin her life, and ran to her room, slamming the door. It turns out she had just done her hair and put on her new skirt which she had wanted to show her dad (which he failed to notice) and it was raining out, which, any woman would know, means there is no way the garbage is being taken out in these conditions and how dare you not notice my hair and outfit?!?!

Jesse took the garbage out without another word. He also did not bother to put on socks and shoes or a t-shirt. And it was raining out. When he came in I said,  “You”ll catch a cold going out like that!” and he grumbled something that sounded like “ok” and walked into the kitchen and ate an entire loaf of bread, jar of peanut butter and drank a liter of milk.

So there are advantages to the testosterone prominence in my home, and disadvantages. Sometimes, I miss having someone to talk things out with. There are occasions, during quiet moments, when I have said to my husband “So what do you want to talk about?” and he gets that slightly panicked look. Daniel comes home from school and I excitedly ask him how his day went, what did they do etc etc (It’s a new school year, I’m curious!) and he replies “it was very… school-ish.” and I don’t get much more than that…  I still recall noticing Jesse, around age 6, staring intensively out his bedroom window for a long thoughtful moment, and asking him what he was thinking about. He replied “Well, when I see a car, I think: ‘a car’. When I see a person, I think: ‘a person’.”

With my friends I can talk easily about all of life’s mysteries. The anxiety of worrying about a relapse. The ups and downs of every day life. The stress of juggling the kids’ back to school schedule. The joy of shoe shopping. The confusion of relationships.

There is a special bond between cancer friends too – we who have faced “the dragon” and felt its hot breath hovering over us (oh that was very descriptive, wasn’t it? Feels right, like we’re little knights in shining armour brandishing our swords above our heads, torn between fear and fury).

You would think a group of women bonded by cancer would be a sad, weeping lot, all of us sitting together in a semi-circle, sharing our sad tales over tea, a box of kleenex nearby being quickly used up. Well, so far, in my experience, it has been quite the contrary! Swap that tea for a good bottle of red wine and there we are, laughing our heads off as one mom tells the story of sneaking a pizza in to her daughter’s hospital room and being caught by a nurse. Keep the kleenex – we’re laughing so hard we’re crying.

We don’t need her to explain all that because we’ve all lived it. What we need, mostly, is to laugh. And be together.

Because when the dragon rears its head and starts charging at you, and all you’ve got is your little sword, you need everyone else to show up with their little swords. One dragon against a whole bunch of sword carrying women (and a pizza) is all we need to keep fighting. And hopefully, most of the time, win the war.