Saturday, across the globe, people participated in Women’s Marches – this movement is not “just” for women, but for everyone. From Sydney, Australia to Vancouver, Canada, people gathered to march against intolerance, to take a stand for women’s rights, minority rights, rights for lesbian, gay, transgender people, rights for disabled people, rights for immigrants and refugees.

And to stand up for Truth . With a capital T. Because apparently that’s up for grabs now.

Here in Geneva,  Switzerland,  a march was organised.  But there was one minor technical problem: I had to work.

I wanted to march.

My friends were going. Tons of people were going. Men, women and children were travelling in to Geneva from as far as Zurich to participate.

But…  I was stuck at the other end of the city at work.

Ok,  I thought, maybe I could still make it happen. I am ever the optimist, after all.

I calculated that if I was replaced a bit early for my lunch break I could maybe – just maybe get to downtown Geneva by bus, have about 10 minutes to spend there, and then race back.

I had made a sign,  bought a sandwich to eat on the ride,  got bus change ready.

But fate was against me. I was replaced a measly 2 and a half minutes early.  I raced outside,  heart pounding,  and watched the bus drive off. Not even close.

I could have screamed.  Possibly,  I did actually let out a couple choice words.  Not sure if it was in my head or actually spoken.  I did stomp my foot.

Trying to make the best of it, I took a pathetic little photo of myself with my sign in the hallway at work and texted it to my various friends at the march.

They texted back with their amazing signs and photos of the thousands of people walking across the bridge downtown Geneva. 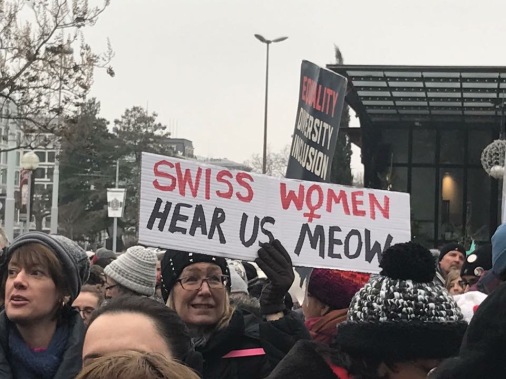 To not be there for the actual march was heartbreaking.

Because “there” is where we are when we decide to take action, to speak up, to stand together, to step forward into this new world of activism that has opened up before us.

People around the world stepped forward together Saturday, and I was with them.

The incredible number of people who participated is impressive. Some of the aerial footage is stunning – and inspiring.

Later that day my husband and I watched the news come in with reports of the massive rallies around the world. And my husband said simply: “This makes me feel better.”

“The world. The future,” he said simply.

We were there. We are there.

And we’re not turning back now.

JUST IN: Women's March on Washington too big to march to White House hill.cm/0LCnSeh https://t.co/Z8nr3wgliB—
The Hill (@thehill) January 21, 2017

View all posts by Nicole